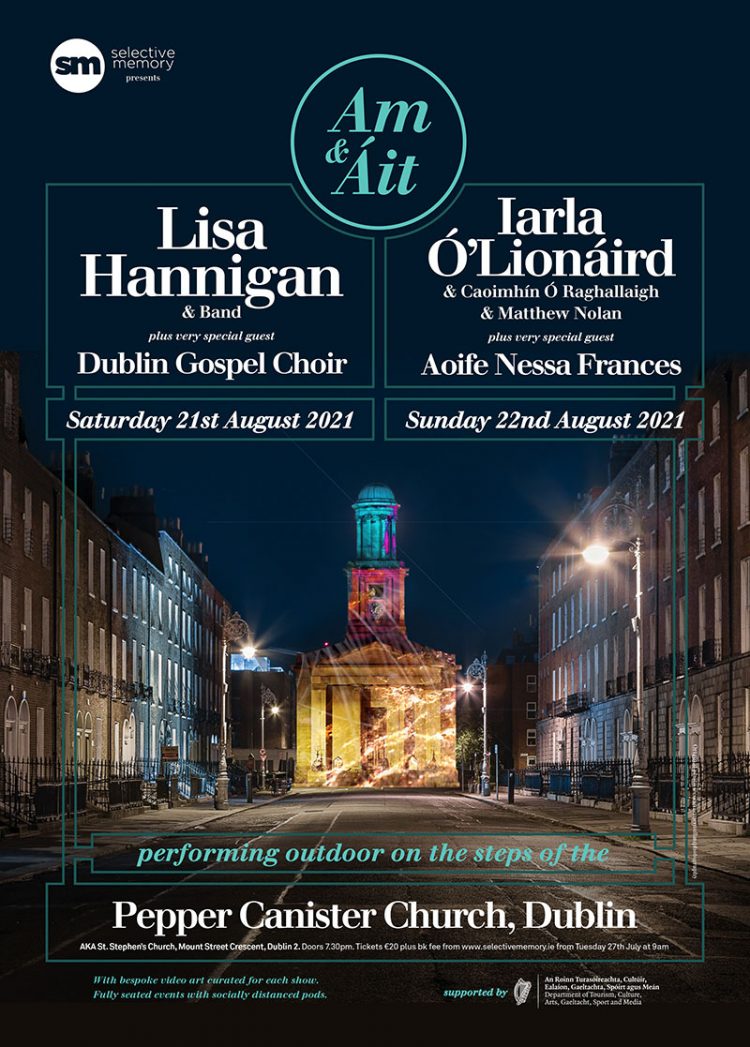 performing live on the steps of the Pepper Canister Church, Dublin

**EXTRA TICKETS RELEASED**
We’re delighted to announce that extra tickets have just been released for both Lisa Hannigan and Iarla Ó Lionáird’s shows at Am & Aít next weekend.
Dublin Gospel Choir have been added as very special guests for Lisa Hannigan‘s show on Saturday 21st August.
Iarla O’Lionaird will also be joined onstage by Caoimhín Ó Raghallaigh from The Gloaming and Matthew Nolan & Ryan Molloy for Iarla’s show on Sunday 22nd August.
Extra tickets were released following the licence approval from Dublin City Council.
Tickets are on sale now.

Prepare to bask in the summer air and the breath-taking talent of some of Ireland’s most exquisite musicians as Lisa Hannigan and Iarla O’Lionaird take to the steps of the Pepper Canister Church for intimate outdoor performances this August. Framed by the splendour of Dublin’s Georgian houses, ‘Am & Áit’, presented by Selective Memory, will be a near spiritual experience for music lovers as these gifted musicians breathe life back into this historical quarter of the city and well-loved venue, performing outdoors on the steps of the church – the architectural jewel in the crown of the Dublin city centre’s South Georgian Core.

In their first live gigs in Dublin since Covid broke out early last year, the ethereal Lisa Hannigan will take to the stage with her band on Saturday 21st August, while the velvet-voiced Iarla O’Lionáird and the brilliant Aoife Nessa Frances come together to perform on Sunday 22nd August.

Starting at 7.30pm each night and finishing by 10:30pm; there will be specially curated video art for each performance projected onto the front wall and dome of the church during the headline acts’ shows.

There will be only 400 tickets onsale for each show, which will be an exclusive and enthralling encounter for the audience who take in the show in comfort as both events are fully seated with socially-distanced pods.

Declan Forde of Selective Memory said: “The last 16 months or so have seen all our lives changed hugely by the onset of covid, and obviously the live music industry has been one of those most effected.   We’ve chosen to do an outdoor show partially to help create more employment with the infrastructure suppliers and employees who are the lifeblood of the outdoor events industry. And what better outdoor setting in the city centre than the spectacular beauty of the Pepper Canister Church. We have designed the shows and chosen artists that we feel appropriately reflect the unique setting. It must be said these shows are only possible with the funding from the Live Performance Support Scheme, which is helping keep our industry alive in these challenging times”

St Stephen’s Church, better known as Pepper Canister Church: this landmark location was one of the last of the Georgian churches built by the Church of Ireland in the early 1800s. St Stephen’s Church is fondly referred to by Dubliners as the Pepper Canister, the nickname derived from the shape of the spire.  While still used as a place of worship, the venue has played host to some of Ireland’s finest musicians in the past, including The Gloaming, for whom  Iarla O’Lionáird is the lead vocalist and lyricist.

The majestic backdrop of the Pepper Canister Church, with its impressive pillars outlining the stage, is set to be a memorable location for an unmissable celebration of song, togetherness, and the eternal beauty of the streets of Dublin – something we have all yearned for during these challenging times.

Tickets are €20 plus booking fee and go onsale only at www.selectivememory.ie this Tuesday 27th July at 9am.

These shows are funded by the government Live Performance Support Scheme.