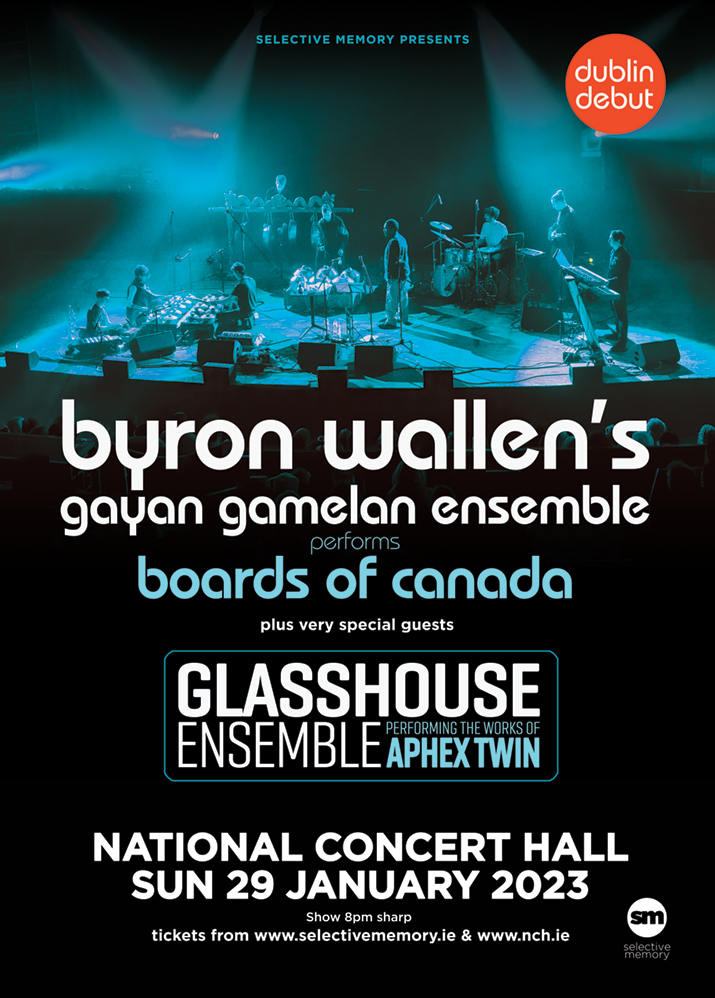 BYRON WALLEN’s
Gayan Gamelan Ensemble
performing
BOARDS OF CANADA
with Very Special guests
GLASSHOUSE ENSEMBLE  – performing the works of APHEX TWIN
National Concert Hall, Dublin
Sun 29th Jan 2023. 7:30pm
Tickets €29.50 On Sale now
BYRON WALLEN – Show PostponedDue to an injury in the Byron Wallen band, the show scheduled for Sunday 25th September has to be postponed. A new date of Sunday 29th January has just been confirmed. Glasshouse Ensemble’s Aphex Twin show will also be the special guest on this date.All other details remain the same and all tickets bought for the original show are valid for the new dateSee you all there

Debut Dublin show for British jazz trumpeter Byron Wallen and his eight-piece Ensemble celebrating one of the greatest albums of all time. His fantastic show pays homage to Boards of Canada’s seminal album ‘Music Has the Right to Children’ working with his rarely used Gamelan Ensemble for a truly unique night.‘Music Has the Right to Children’ is the debut studio album by Scottish electronic duo Boards of Canada. It was released on 20 April 1998 in the United Kingdom by Warp and Skam Records and in the United States by Matador Records. The album stands as the Scottish duo’s magnum opus, made all the impressive by the fact that it was their debut record.An adult meditation on childhood, concerned with play, naïveté and nostalgia, all tinted with rosy pastoralism, the sensitivity of the compositions marry beautifully with Byron’s orchestration of the Gamelan sound.“An enthralling celebration of a very nuanced album… Hairs sprung up on the back of my neck, and the audience screamed with appreciation” –Resident Advisor