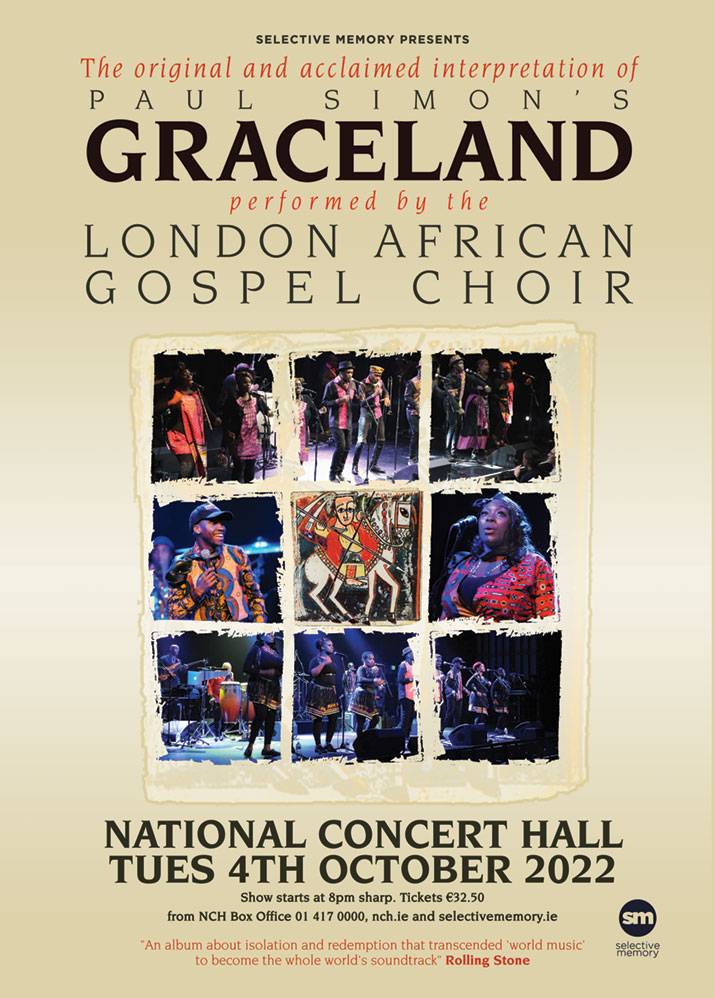 Known for bringing African gospel into the hearts of audiences worldwide, the London African Gospel Choir have announced their their return to Dublin with their performance of Paul Simon’s classic “Graceland” at the National Concert Hall on 4th October 2022, which will be performed by 16 members of the choir. On the night the audience can expect unforgettable arrangements of Paul Simon songs such as “The Boy In The Bubble”, “Diamonds On The Soles Of Her Shoes” and “You Can Call Me Al”. The renowned choir frequently headline their own tours around the world, with dates regularly selling out, along with appearing on festival bills around the UK and Europe. Closer to home, in 2018 they performed at the Cathedral Quarter Arts Festival in Belfast, which sold out months in advance and performed on the All Together Now main stage. With a host of hits from “Graceland”, this performance is not to be missed.

It’s the meaning of the words that counts and Paul Simon’s “Graceland” – acclaimed as one of the most iconic records in rock and roll history on its release in 1986 – is a perfect fit with its uplifting lyrics and South African rhythms and melodies. In the wake of Graceland’s 30th anniversary, Camden’s Jazz Café commissioned the London African Gospel Choir to perform the album in its entirety for one night only. Tickets sold out within hours and so five more nights were added and they all sold out as well, confirming the enduring appeal of Paul Simon’s masterpiece, and also the growing excitement generated by the Choir’s string of notable stage and television appearances.

Over the years the choir has performed on stage and television with stars like Emile Sande, Mumford & Sons, Tom Jones and the Soweto Gospel Choir, with whom they made a triumphant appearance at London’s 02 Arena, singing in front of 17,000 people. Annie Lennox also invited them to perform at a number of prestigious events, including the MIT Awards and the choir has worked with actor/director Idris Elba, star of “Mandela: Long Road To Freedom” who recruited them for an album celebrating South African music, recorded in tribute to Nelson Mandela.