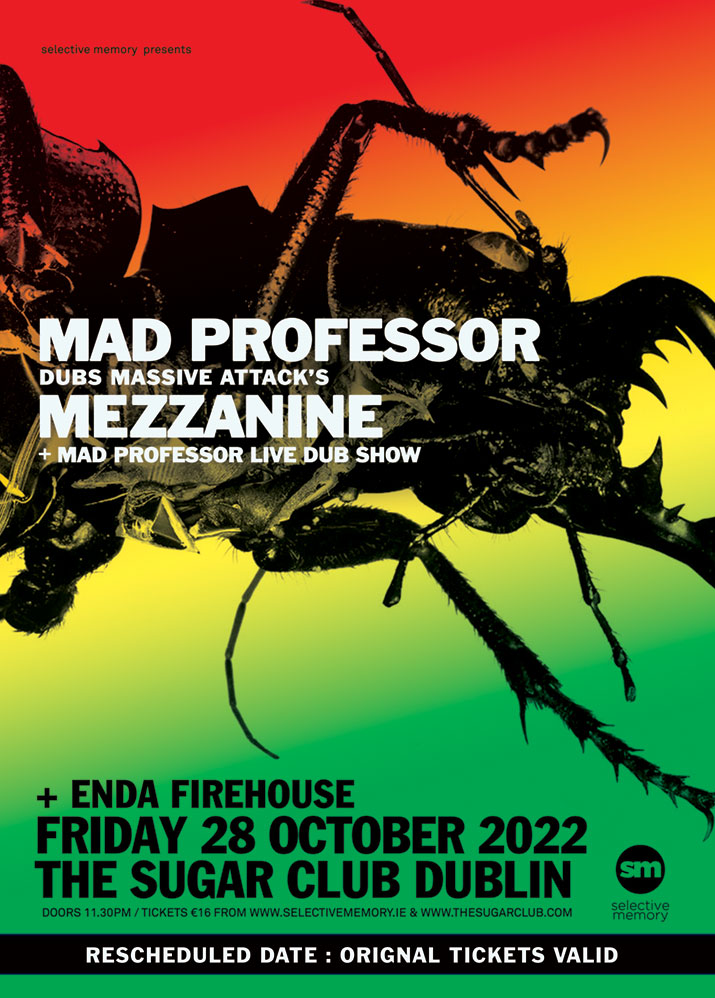 Mad Professor is still coming to The Sugar Club in Dublin to perform his dub reinterpretation of Massive Attack’s classic Mezzanine album, but we have rescheduled the show. Tickets for the new date remain valid for the new date.

Tickets to Mad Professor at The Sugar Club are EU16.00 (plus bkg fee) and are on sale now from www.selectivememory.ie

Mad Professor was asked by Massive Attack to perform this Mezzanine show as part of the day at London’s All Points East festival that they are headlining and curating in late May.  This will be the first time it’s performed in Ireland. The show at The Sugar Club now on Friday 2nd April this will be a 2 hour show in two parts, featuring both his Mezzanine show, and also the Mad Professor live Dub show featuring classics from throughout his 40 year career and other dub reggae classics.  This is Mad Professor’s first Dublin show of any kind since 2014, and will feature a guest vocalist from his legendary Ariwa label.

Mezzanine was Massive Attack’s groundbreaking third album, originally released in 1998, and saw them broaden their signature trip hop sound to encapsulate other genres including new wave, electronica, rock and dub reggae.  It featured the smash hits Teardrop, Angel and Inertia Creeps  amongst others, and reached number 1 in the album charts of several countries including Ireland, UK and Australia.  Publications that later listed it amongst the greatest albums of all time include Rolling Stone, NME and Q; while Pitchfork awarded it a very rare 9.3/10 rating.

These radical re-workings by Mad Professor invite the listeners to hear these classics through a different prism.

Enda from Dublin’s legendary Firehouse Skank will be the opening act on the night. This will be a late show, doors 11.30pm till late.

Tickets for the original detail remain valid for the new show.

Mad Professor is considered one of the leading producers of dub music’s second generation and was instrumental in transitioning dub into the digital age. He has collaborated with reggae artists such as Lee “Scratch” Perry, Sly and Robbie, Pato Banton, Jah Shaka and Horace Andy, as well as artists outside the realm of traditional reggae and dub, such as Sade, Massive Attack, The Orb, Gaudi, the Brazilian DJ Marcelinho da lua, Grace Jones, and Perry Farrel.