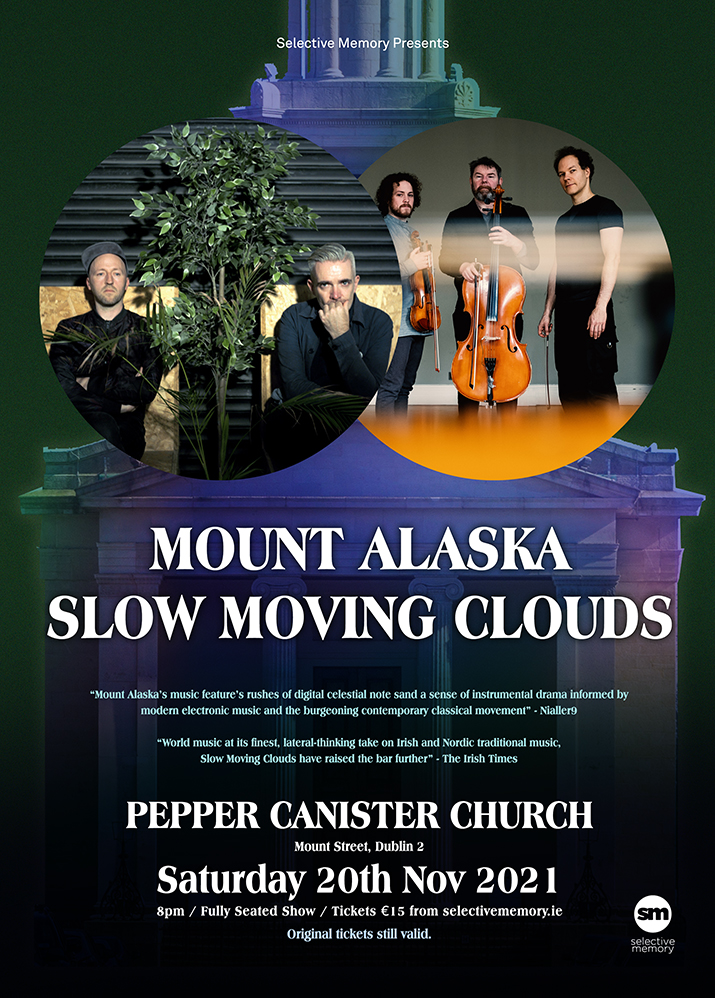 Slow Moving Clouds, have been added to the bill and will perform before Mount Alaska, on Thursday 18th March for what promises to be a stellar evening in the landmark Georgian Pepper Canister Church, Mount Street Crescent, Dublin 2. Slow Moving Clouds commence at 8pm.

Slow Moving Clouds are a band based in Dublin, Ireland. They bring together roots in the Irish and Nordic folk traditions with post-punk drones, baroque strings, and soaring falsetto vocals – creating an immersive, atmospheric sound unlike anything you’ve heard before.

Following on, Dublin duo Stephen Shannon and Cillian McDonnell aka Mount Alaska who will bring their euphoric, electronic sounds – Let’s raise the roof!

This unique evening will see the stunning interior backdrop of the Pepper Canister Church bathed in light, designed by artist Steve Mac Devitt, making this an experience not to be missed.

Tickets for Mount Alaska & Slow Moving Clouds cost EU15.00 and are on sale from www.selectivememory.ie

“A gorgeous swoosh of an album” – The Irish Times

“This is the soundtrack for life” – Totally Dublin

Mount Alaska is a music project from Dublin production duo, Stephen Shannon and Cillian Mc Donnell. Seasoned stalwarts of the Irish music industry, the former members of Halfset returned in 2017 with their debut single. After Halfset, Stephen and Cillan started working together in 2012, spending time in isolated places to help them focus on a completely new sound. The pair followed up their debut single with a string of critically acclaimed releases in 2018 on their own independent label, Language Recordings. Following a number of live shows and festival appearances at All Together Now, Another Love Story, Metropolis and Forbidden Fruit, the band signed with 251 Records (a partner label of Faction Records and home to Martin Hayes Quartet), to release their debut album, Wave Atlas: Season One, in November 2019. The album was written, recorded and produced by Shannon & Mc Donnell, in Shannon’s Dublin studio, Experimental Audio. The concept for Wave Atlas: Season One came from a desire to create a soundtrack for a TV show that doesn’t actually exist, and it is also an ode to some of their favourite composers: Max Richer, Ólafur Arnalds, Jóhann Jóhannsson, Delia Derbyshire, Rival Consoles and Wendy Carlos.

On Starfall, the band’s second album, their folk roots merged with indie and experimental influences, expanding the sonic palette and power of their earlier work. The album is available digitally on the PEOPLE music platform, led by Justin Vernon (Bon Iver) and the Dessner brothers (The National).

In 2019 Slow Moving Clouds toured the UK with Jenny Lewis and opened for Feist at the Sounds From a Safe Harbour in Cork.

In 2016 Slow Moving Clouds (with the band’s original fiddle player Danny Diamond) created the score for Teac Damsa’s Swan Lake / Loch na hEala, a contemporary adaptation of the classical ballet, set in the Irish midlands. The work premiered to critical and popular acclaim at the 2016 Dublin Theatre Festival, and was awarded Best Production at the 2017 Irish Theatre Awards. The Guardian listed the show, the second best dance show of the 21st century! The show is currently touring internationally.