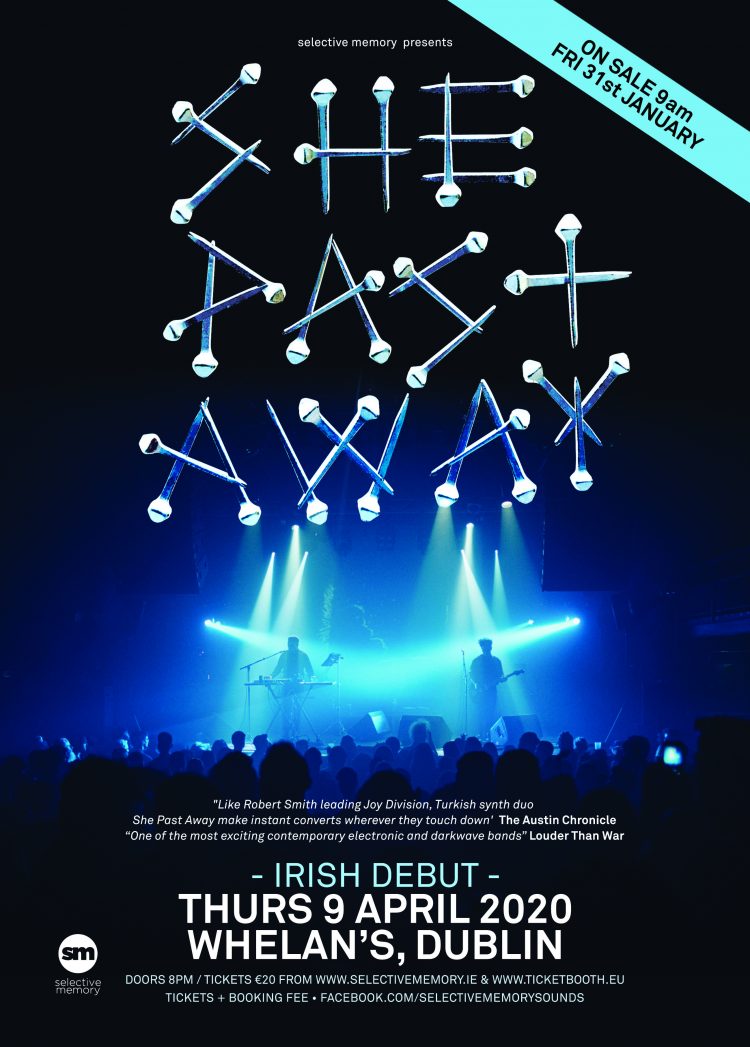 “Like Robert Smith leading Joy Division, Turkish synth duo She Past Away make instant converts wherever they touch down’ – The Austin Chronicle

Darkwave Legends, She Past Away, will perform their long awaited debut Irish show, in Whelans on Thursday 9th April, doors 8pm. Tickets cost EU20 and are on sale from 9am Friday 31st January from www.selectivememory.ie and http://bit.ly/ShePastAway

She Past Away is a dark wave / post-punk duo, consisting of Volkan Caner (vocals, guitars and songwriting) and Doruk Ozturkcan (drums, synths and production). They released their third album last year, which led to sold out shows all over Europe and North America.

Experimenting old/new aesthetic of synth music into their core guitar stuff, She Past Away forged a sound, an attitude, and a sensibility, conveyed through a minimalist poetry sung in Turkish, which sweeps the audience through a dense, continual epic trip in both their recordings and live performances.

She Past Away released their critically-acclaimed first EP “Kasvetli Kutlama”, via Remoov in April 2009. Following the digital release of the debut album “Belirdi Gece” in February 2012, the band was signed to Fabrika Records in 2013 and shortly thereafter they released “Belirdi Gece” in LP format. Including “Rituel”, “Ruh” as well as “Kasvetli Kutlama”, the album was listed as one of the best albums of the decade 2010-2019 by post-punk.com.

With the release of their follow-up album “Narin Yalnızlık” in May 2015, the duo established themselves as one of the most influential and successful genre-defining acts of dark wave music and scored numerous crowd-puller performances all around the world. Not long after the release, Volkan moved to Barcelona and Doruk to Athens with the intention of projecting their career in Europe and continued touring and working on the new record. In December 2018, the band signed to Metropolis Records and re-issued both albums in North America.

The band recently graced the audience with a beautifully dark and driving new album “Disko Anksiyete” via Metropolis Records and Fabrika Records in May 2019 ahead of their North / South America tour.

SHE PAST AWAY is a driving, mesmerizing outburst of sentimental anxiety through the nihilistic mind-frame. It is both personal and broad, like a wandering mind brave enough to question taboo and existence.