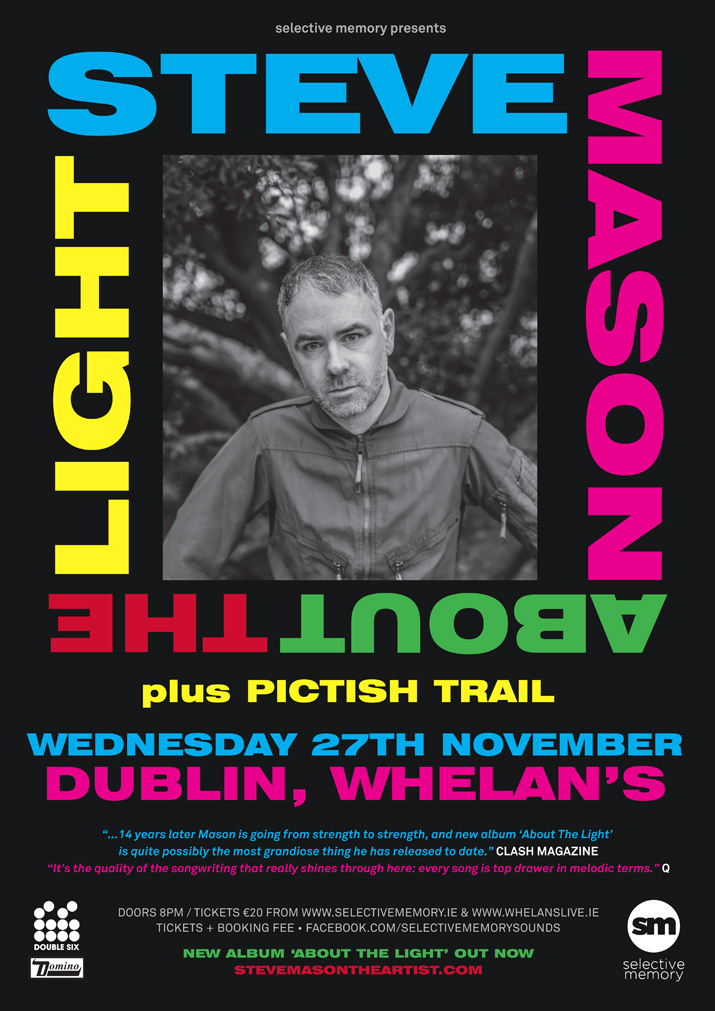 TICKETS GO ON SALE THIS WEDNESDAY 1 MAY AT 10AM

Scottish singer, songwriter, and producer Steve Mason has announced his first Dublin headline show in eight years at Whelan’s on 27 November 2019. Rising to widespread critical acclaim in the late ’90s as a member of indie darlings The Beta Band, Mason is set to return to Dublin this November for a highly anticipated show following the January 2019 release of his fourth album, “About The Light” on Domino Records/Double Six Records.

Tickets €20.00 plus booking fee (additional charges may apply) go on sale this Wednesday 1 May at 10am from Selective Memory (http://selectivememory.ie) and Whelan’s (www.whelanslive.com).

Praise for “About the Light ” included:

“It’s the quality of the songwriting that really shines through here: every song is top drawer in melodic terms.” Q 8/10

“…14 years later Mason is going from strength to strength, and new album ‘About The Light’ is quite possibly the most grandiose thing he has released to date.” Clash Magazine 9/10

‘While there are hints at the bleak vibrations that defined his previous solo work, the John Squire-ish groove of The End and beatific title track stand out as stunning comebacks from this folk euphoria original’ Mojo 8/10

‘About the Light is a muscular, vibrant, even vivacious collection of songs that will thrill and challenge listeners in equal measure.’ Under the Radar 8/10

‘The only downside to the album is that it is so easy to listen to, we are carried almost unaware to The End, the final track in a collection of well-thought-out and well-curated tunes.’ The Skinny 8/10

“Buoyed by finding love, becoming a father, and settling in Brighton, Mason channels the positivity in his life on songs that capture the joy of simply making music. Joined by legendary producer Stephen Street, the pair pan for pop gold and between them uncover golden nugget after golden nugget on his most celebratory and immediate album to date.” Popmatters

With their creative songscrap approach and maverick attitude, The Beta Band earned a somewhat notorious reputation among fans and the U.K. press during the post-Brit-pop era, thanks to releases like 1998’s “The Three EP’s” and 2001’s “Hot Shots II”. During the Beta Band’s heyday and following their 2004 breakup, Mason also recorded as King Biscuit Time and later set out on a proper solo career with albums like 2013’s “Monkey Minds in the Devil’s Time” and 2019’s “About the Light”.

Mason had already debuted a solo project, King Biscuit Time, late in 1998, and during the 18 months that followed the Beta Band’s breakup, he released a pair of King Biscuit singles — including “C I AM 15,” which reached number 67 on the British charts — and a full album, 2006’s “Black Gold”. One year later, he launched an electronica project called Black Affair, and a techno-influenced LP titled “Pleasure Pressure Point” appeared on V2 in 2008. He subsequently returned to a Beta Band format for his first album under his own name, a late 2009 single titled “All Come Down.” The expected full-length album, “Boys Outside”, with production help from Richard X, appeared in 2010 on Double Six, distributed by Domino. Provided with polished production, Steve Mason’s poignant songwriting and powerful vocals were brought to the fore. The album was then given a dub reworking by Mason and Dennis Bovell. “Ghosts Outside” displayed the singer/songwriter’s effortless ability to span genres successfully, while remixing the likes of Django Django showed Mason’s hunger for creativity was not slowing down.

In early 2013, his third album under his own name arrived. Among its sprawling 20 tracks, “Monkey Minds in the Devil’s Time” explored depression, politics, and human nature, bringing together many genres to create a mesmerizing experience. His next record focused purely on himself, wringing out personal emotions and experiences for 2016’s “Meet the Humans”, bringing aboard Craig Potter (Elbow) to produce the album. With a number of solo tours under his belt, Mason wished to recreate the same live energy on record; the resulting album, 2019’s “About the Light”, featured a live band throughout the recording process to capture the feeling of his shows.