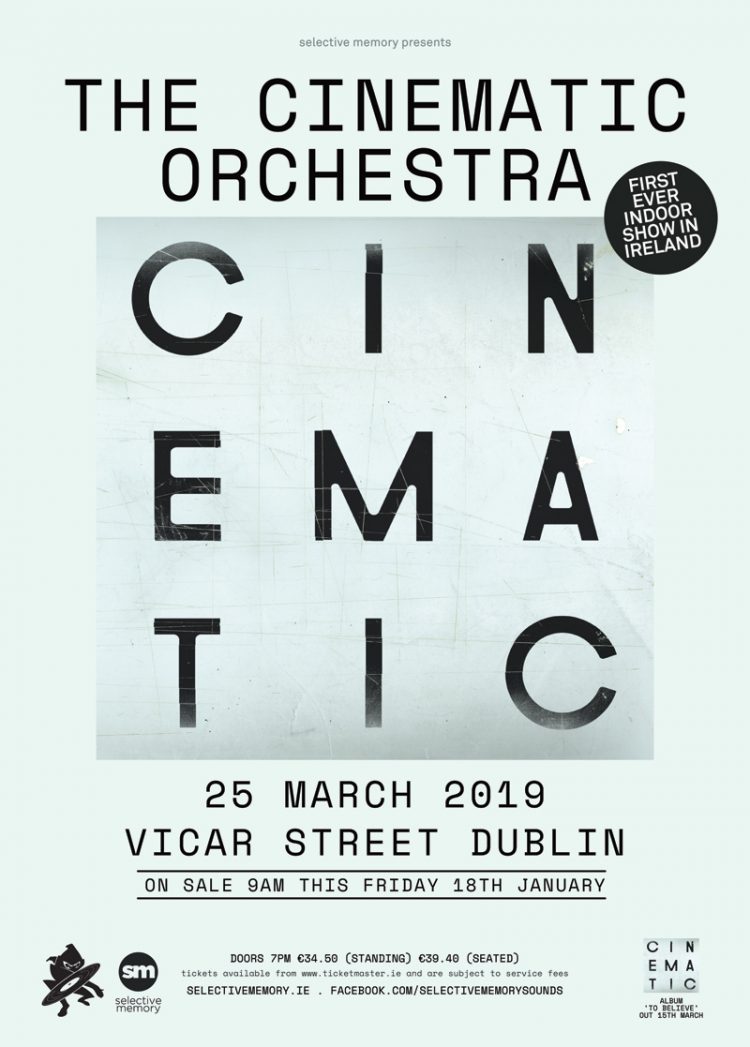 The Cinematic Orchestra are back with an international tour including their first Irish show in 12 years, a definitive new album ‘To Believe’, and a new single ‘A Caged Bird/Imitations of Life’ featuring Roots Manuva

Since “Motion”, The Cinematic Orchestra have sold hundreds of thousands of albums, generated almost half a billion streams and enjoyed critical support from the likes of Pitchfork (8.6 for second album “Every Day” which featured two collaborations with legendary Art Ensemble of Chicago singer Fontella Bass), The Guardian, New York Times, Le Monde, Resident Advisor, Fader, Mixmag, NME, Crack (whose Simple Things festival the band headlined in 2016), Rolling Stone, Gilles Peterson, Benji B, Jason Bentley, Zane Lowe, Annie Mac, Lauren Laverne, KCRW and Mary Anne Hobbs. ‘To Build A Home’ has been synced to dozens of films and TV shows including the Orange Is The New Black finale and This Is Us, adverts include Burberry, Armani, Nike and Apple. The ‘To Build a Home’ short film was directed by Andrew Griffin and stars Peter Mullan (Trainspotting, Harry Potter).

The band have also been touring, consistently performing to larger and larger audiences and selling out the likes of London’s Royal Albert Hall, Philharmonie de Paris, Rome’s Auditorium Park Della and the Sydney Opera House. Coachella, Glastonbury, Fuji Rock, Montreux and Sonar have all played host to the band’s much loved live performances. Beyond the obvious they have also appeared at the Directors Guild Lifetime Achievement Awards for Stanley Kubrick and New York’s Summerstage with the legendary Majavishnu Orchestra with John McLaughlin, they curated a series of events at London’s prestigious Barbican Centre featuring commissions from the prodigiously talented Austin Peralta (RIP) and seen the likes of Dorian Concept, Thundercat, Moses Sumney and Gilles Peterson support them on stage over the years. They scored Disney’s feature length nature documentary “The Crimson Wing” including the track ‘Arrival of the Birds’ which featured in the closing scene of the Oscar Winning Stephen Hawking biopic “The Theory of Everything”. They also released a Late Night Tales compilation featuring music from Flying Lotus, Burial and Björk.

Don’t miss The Cinematic Orchestra live in Ireland for the first time in 12 years at Dublin’s Vicar Street on 25 March 2019. Tickets go on sale this Friday 18 January at 9am from Ticketmaster.ie.