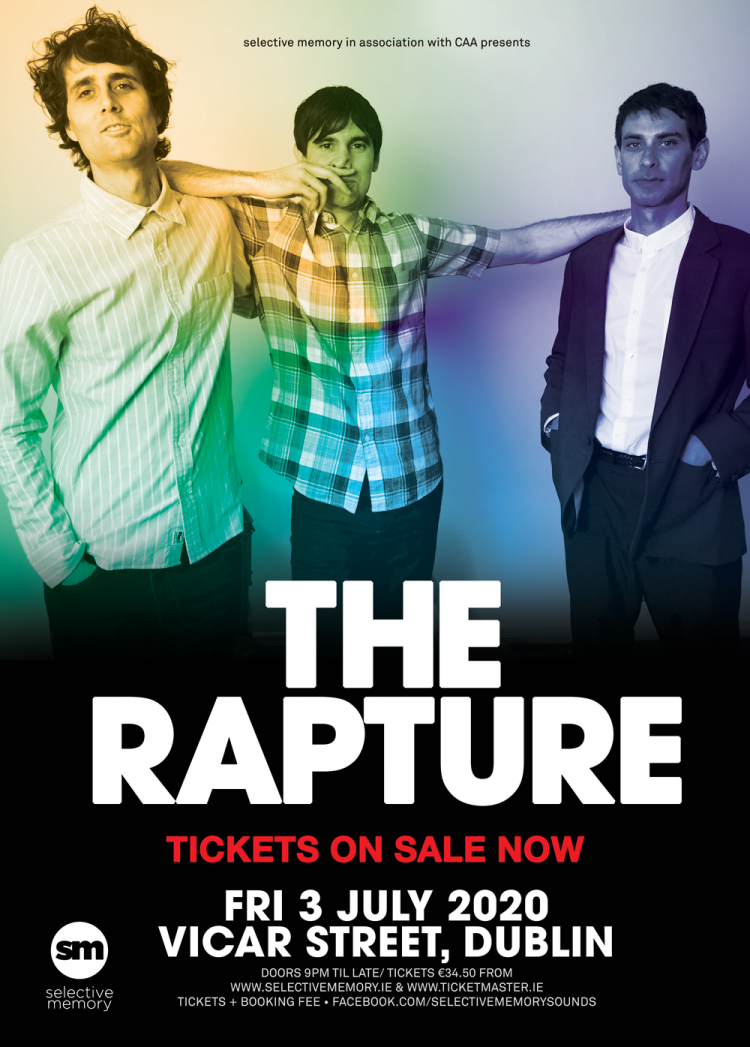 With regret, we announce that this Selective Memory ‘The Rapture’ show could not be rescheduled and has now been cancelled.
Refunds will be available from the point of purchase.
We have been working behind the scenes with artists, venues and suppliers, and are delighted to have rescheduled so many of our shows. We look forward to seeing you in the future.
Tickets remain valid for all new dates. Information and tickets are available here: https://selectivememory.ie/
Thank you for your continued support,
The Selective Memory Crew

Having reformed last year after a 5 year hiatus, The Rapture are back and coming to Dublin!

Alongside labelmates and peers LCD Soundsystem, The Rapture defined the punk-electro crossover sound that came out of New York on DFA Records in the mid-2000s. Their classic debut album Echoes was voted best album of 2006 by Pitchfork and number 2 by NME.

Tickets cost EU34.50 and are on sale from 9am Friday 7th February from www.selectivememory.ie and www.ticketmaster.ie

‘The Rapture still maintains a flailing energy and enthusiasm that most of the other dance punk bands could only fake.’   Pitchfork

Please note this will be a late evening show with The Rapture due onstage around 11pm. Doors 9pm with support acts to be announced.

‘The Rapture, back after nearly a decade away,  was downright ferocious in scratchy disco-punk tunes like “Get Myself Into It” and “House of Jealous Lovers,” the latter of which helped launch the New York rock revival that also gave us the Strokes and Vampire Weekend’    LA Times

The Rapture, will perform their first Irish show in 8 years, in Vicar St on Friday 3rd July.

Tickets cost EU34.50 and are on sale from 9am Friday 7th February from www.selectivememory.ie and www.ticketmaster.ie