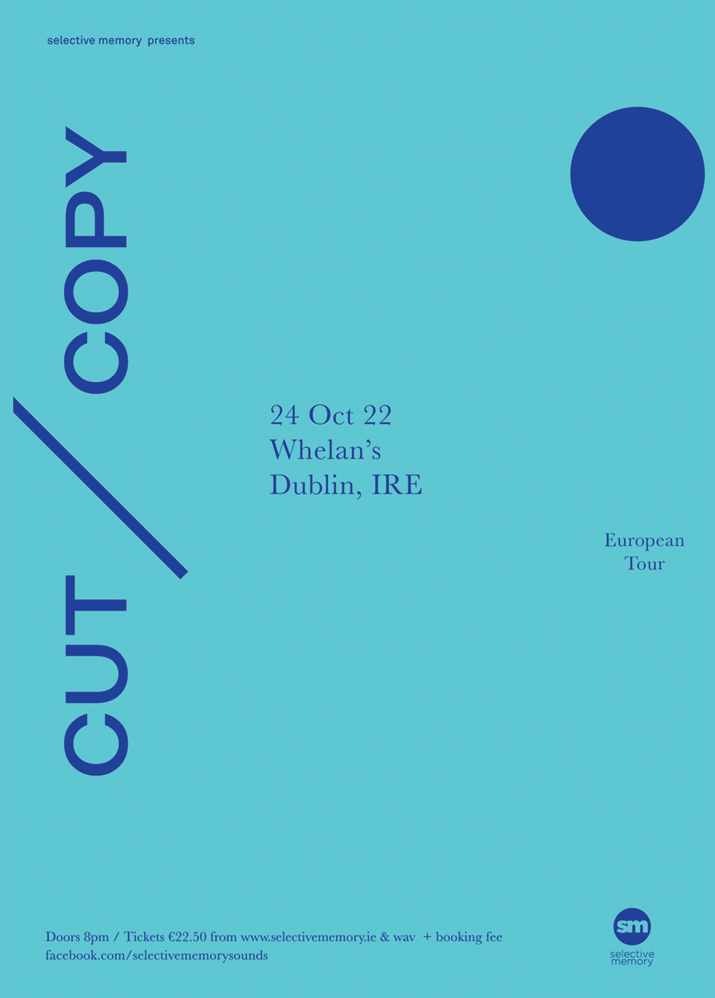 Cut Copy are a GRAMMY® nominated, ARIA award-winning musical act with numerous festival-headlining slots and over 1,000 sold-out headline shows spanning several continents to date. Initially the bedroom recording project of Dan Whitford, Cut Copy evolved into a full-fledged band with guitarist Tim Hoey, drummer Mitchell Scott, and bass player Ben Browning. The quartet’s studio albums include In Ghost Colours, which Pitchfork named as one of the best albums of 2008 and among the top albums of the 2000s, and 2011’s Zonoscope, which won two ARIA Awards and was nominated for a GRAMMY®. Their last album, 2017’s Haiku From Zero, represented the band at their most refined and efficiently emotive.


Their new album Freeze, Melt, mainly written during a Scandinavian winter during frontman Dan Whitford’s time in Denmark, reflects the time and place in which it was created, with a much more moody and evocative spin on their trademark synthesizers and melodies. Cut Copy have managed the clever hat trick of simultaneously expanding their sound while also refining it. While previous records explored peak-time hedonism, this is a soundtrack to the perfect gentle comedown. Cut Copy’s songs have been licensed for use in television, games and commercials, including FIFA 18, Chevrolet, Netflix, Amazon, and Levi’s® #LiveinLevis campaign. DJing and mixes have also been a big part of their identity – from the band’s famed Fabric mix, Fabriclive.29, to the 2014 Melbourne dance compilation, Oceans Apart. In addition to headlining massive sold-out shows, the band has gained prime slots at prestigious festivals such as Coachella, Ultra, and Lollapalooza in the U.S.; Primavera in Spain, Pitchfork in Paris; Summer Sonic in Japan; and Big Day Out in Australia.

Melbourne four piece Cut Copy’s path takes a sharp turn inward on Freeze, Melt. A tonal reflection of the place it began and a sober reaction to an overconnected world, Freeze, Melt eschews folie for headier pastures. On their sixth album Cut Copy focus their energies on making the mind rather than the body dance to the kind of cold-steeled machine melody and subtle emotional manipulations that have lurked at the periphery of the Cut Copy oeuvre but never taken the spotlight.

The genesis of Freeze, Melt goes back to an especially cold European winter of 2018, when Dan Whitford was based in Copenhagen and the subzero source casts ripples on the sound of the record. “The music feels stasis-like, where time stands still, perspective flattens out and things take on a painterly abstraction,” Whitford says. “Like a still-life. Like living in an air lock. The palette is monochromatic and neutral. People have been here, but there are no people here.”

If their last album, 2017’s Haiku From Zero, represented the band at their most refined and efficiently emotive, Freeze, Melt’s slow reveal feels more akin to 2016’s January Tape, an extended electronic meditation all but devoid of vocals that plays its hand slowly but sublimely. “It’s the most ‘electronic’ album we’ve made, but also the least ‘dance,’” says Whitford. “In the past when we were in the studio we were striving to move people on the dancefloor, but in this case it was all about trying to move people in more of an emotional way.”

Grayscale electronics, stiff rhythms and an austere atmosphere cast a cold shadow, recalling industrial, no wave and German synthesizer music. In contrast to this, there’s a vitality at the core of Cut Copy that can’t be completely suppressed, showing itself in waves of beatific electronica, triumphant polyrhythmic grooves and post-rave ambient reverie.

“Cold Water” draws on the duality, with stoic chiming machine melodies giving way to midnight sun revelation, while “Like Breaking Glass” goes further into the light via enraptured arpeggiators and roto-rhythm. “Love Is All We Share” breathes a universal truth, expanding and contracting into deep space via keyboard morse code and choirs of cyborgs, before “Running In The Grass” soars from mutant percussive melodies to a sky high chorus rush. “Transit” closes the set with a poignant dose of floating futurist melancholia, celestial keyboards spinning towards a final supernova.

Lyrically, Freeze, Melt ponders love in strange times. A time unprecedented in terms of constant connectivity, but when methods of interfacing are un-IRL. When everything is likable, but the outside world becomes increasingly volatile and problematic. Freeze, Melt begs the question – how do we love in a time when the world is falling apart?

Following Whitford’s initial sketches in Denmark, the band regrouped in suburban Melbourne to record at a studio ensconced in forest, surrounded by native birds. The record returned to Scandinavia to be mixed in Gothenburg, Sweden by Christoffer Berg (The Knife), closing the loop and inscribing Scandinavia in the record’s DNA.

For any additional information or media requests