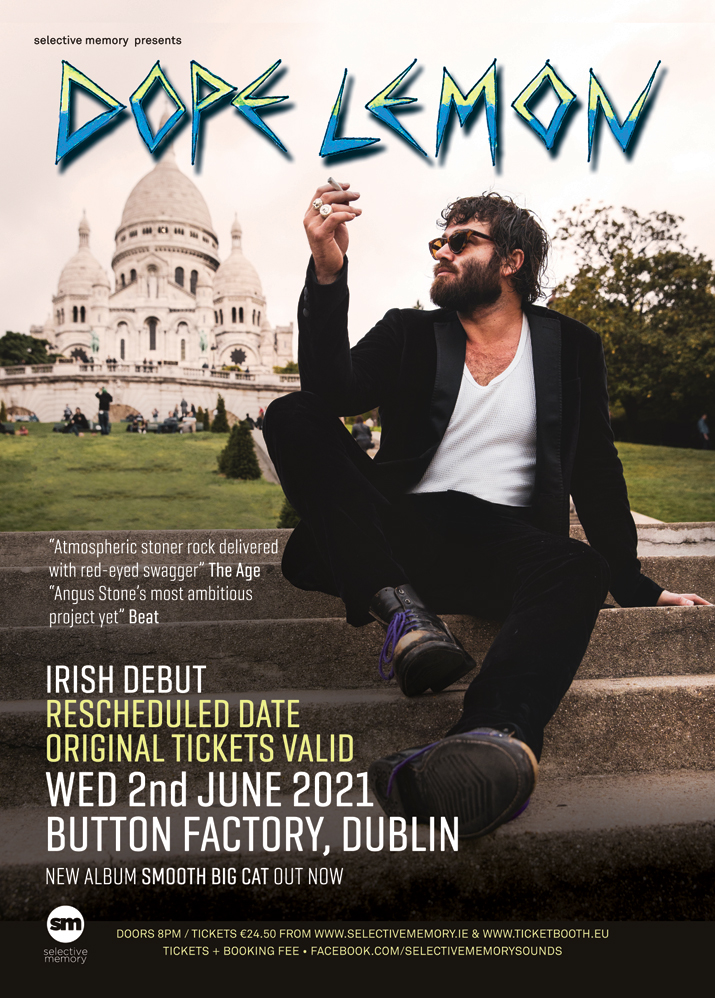 Dope Lemon is Angus Stone’s band (of renowned Australian folk and indie pop duo Angus & Julia Stone). As Angus & Julia Stone have not played in Ireland in over a decade, we are delighted to host this highly anticipated debut performance by Dope Lemon.

Tickets cost EU24.50 and are on sale from www.selectivememory.ie and http://bit.ly/dopelemondublin

Two years ago, Stone, already known in the UK as one half of the celebrated Australian folk-pop duo Angus & Julia Stone, released Honey Bones, his debut as Dope Lemon, in Australia. That record has gone on to amass over 100 million streams since release and has seen Dope Lemon become not just a melting curio of artistic experimentation, but a fully-fledged cultural phenomenon in Stone’s homeland.

Give Me Honey is a peachy ride glowing with groove and swagger.   Watch drag queen Callum Lawson steal the dreamy spotlight in the visual accompaniment, captured by Award-Winning Director and Cinematographer Stefan José HERE.

Featuring first single Hey You, and a further previously revealed album track. Salt & Pepper,  Smooth Big Cat was recorded over three months at Belafonte, the studio on Stone’s Byron Bay ranch. Angus played every instrument on the record, produced and mixed every song.  The new LP is Dope Lemon squeezed to pure juice, distilled to a nectar fit for the gods, sweet on everyone’s lips. A record for wild hearted escapades and fuzzy, melty moments laying back on the rug.  Album and tour bundles are now available at www.dopelemon.com.

Tickets for Dope Lemon debut Irish show in Dublin cost EU24.50 and are on sale