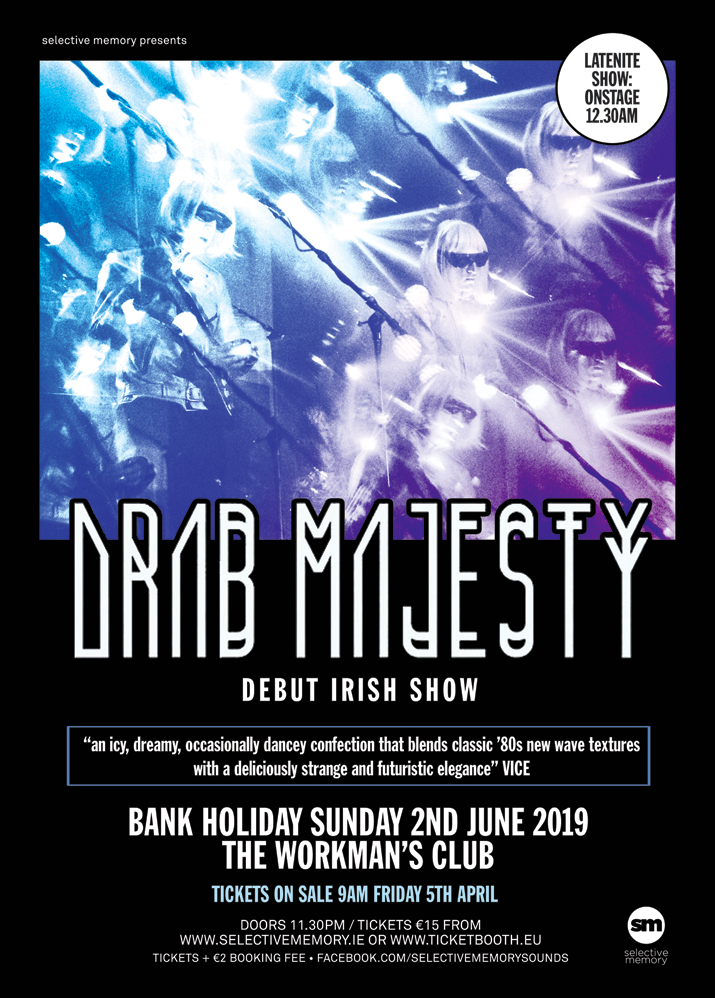 Los Angeles gothic electro heroes Drab Majesty have announced their first ever Irish show at Workman’s Club on Bank Holiday Sunday 2 June 2019, ahead of the imminent release of their third album. Having spent late 2018 supporting Smashing Pumpkins on their US Tour, having been personally invited to support the band by Billy Corgan, their late night show in Workman’s Club will follow Drab Majesty playing one of the world’s best-known music festivals Primavera Sound. With the band expected on stage at 12.30am, Drab Majesty will keep you dancing all night long – and is a show is not to be missed! Tickets €15 plus booking fee go on sale Friday 5th April at 9am from Selective Memory (www.selectivememory.ie) and Ticketbooth (www.ticketbooth.eu).

Drab Majesty began as a warbled transmission received via 4-track cassette in a dim, Los Angeles bedroom in 2012. The entity known as Deb Demure, an interdimensional muse of sorts, lent an otherworldly vision to a human contact; one to be realized through meticulously composed lo-fi recordings. Focusing on the aesthetics of cult ritual and the devastating power of music, Deb sought an alternative way to share the cosmic agenda. Culminating in a cassette titled Unarian Dances, Drab Majesty’s manifesto to humanity was revealed: revel in the power of artistic influences that reside beyond the self.

The tape circulated through Los Angeles, catching the attention of local tastemakers like the heads at Lollipop Records in Echo Park. It quickly found a place on the shelves of LA’s underground musical seekers. After a gauntlet of performances and late night manifestations, Drab Majesty came on the radar of DAIS Records.

In 2015, Drab Majesty released Careless, the first LP which was received and recorded solely by Demure on living room floors and in cluttered spaces across the city. After three pressings and an imminent fourth, Careless remains a fixture in LA’s somber yet sublime nightlife and a noted contribution to the murkier subcultures abroad.

Wielding a left-handed guitar, Deb employs a unique style of arpeggiated finger picking, producing vast and organic musical textures reminiscent of Vinny Reilly (Durutti Column) with the anthemic power of Sisters of Mercy and Cocteau Twins. In the past two years Deb has been invited to support bands such as Psychic TV, Clan of Xymox, The Frozen Autumn, Prayers, and label mates Youth Code and King Dude.

From its incarnation, Drab Majesty was a solo act; an interplay between guitar and triggered machines. In 2016, with growing audiences and heightened interest, Drab expanded into a duo, employing the keyboard accompaniment of far-out twin, Mona D – filling out frequencies and upping the spectacle of the live performance.

“Just in time for the grey skies of El Nino comes the second pressing of this synth-electro-goth marvel from Deb Demure’s perfectly named Drab Majesty. Much like the aforementioned weather phenomenon, Drab Majesty occupies the creative sweet spot between ice and warmth, producing an album that is the aural equivalent of floating suspended in an isolation tank.” L.A Record

“Drab Majesty mastermind Deb Demure looks like a cross-dresser from outer space who’s about to graduate from a UFO cult into something ten times more bizarre.” Noisey