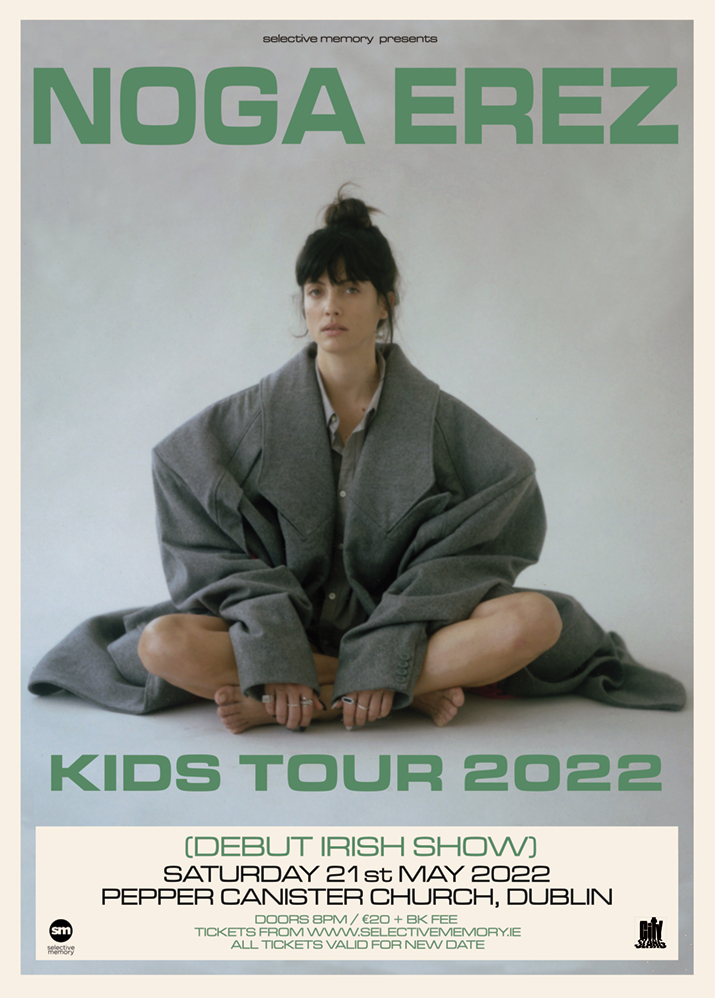 Tickets to NOGA EREZ , at The Pepper Canister Church, Dublin are EU20.00 (plus bkg fee) and are on sale at now

“Erez’s songwriting is clever, nuanced and often packed with wit. On KIDS she shows how far she’s come in crafting her sound in just a few short years.” 8/10 AllMusic

“Kids sees her punching through with aplomb, via 13 lean, attitudinal songs with a bass music and hip-hop/trap chassis, fitted out with pop hooks and featuring her fine, versatile voice.” Mojo

Musician and producer, Noga Erez finds her feet on KIDS, her bold second album for City Slang Records made with her creative and life partner Ori Rousso. Building from the raw politics of her 2017 debut, Off The Radar, KIDS moves closer to home while retaining her signature smarts and swagger. Its earworms and crisp productions are locked around lyrics that deal with the personal and the political; mortality and loss; war and peace, insecurity and ambition. As with Off The Radar, Erez never pulls her punches, whether that’s with politics or production.

The world has changed in the three years since Off The Radar, and so has Noga Erez. KIDS is a reaction to the world she is in, one where politics permeates every day. “The world is a messy place,” she reflects. “I’m not backing off from the politics of Off The Radar. KIDS is political, because nowadays, everything is political – even deciding not to get involved. KIDS is reflective of the time in which it was made.”

After a series of singles, KIDS comes packed with chart-worthy outspoken pop anthems for the 21st century. KIDS replaces the shadow and fury of Off The Radar with neon brights, bold lines, in determinedly audacious and confident productions that swap ferocity for bounce, gloomy moods for fierce swagger. Erez has truly found her style, growing into a crisp bombastic sound she crafts with Rousso, that contains tension and release, anxiety and remedy, and masterly melodic licks in swipes of stomping brass, all wrapped around Erez’s versatile vocals that quick-switch from clipped flow to smoky purr; from stadium chorus to street-ready beats.

KIDS contains songs about loss, personal relationships, politics, and the relationship between parent and child – addressing serious subjects without compromising catchiness. KIDS dishes out perfect pop hits, ‘VIEWS (feat. Reo Cragun & ROUSSO)’ and ‘NO news on TV’ – the latter of which drops with funk and wiggle, whereas ‘You So Done’ explores toxic personal relationships. On ‘Knockout’ and ‘Bark Loud’ she gets self-critical with lyrics about her own ruthless ambition – “I find it interesting, that you can treat yourself as a victim of circumstance in order to be relentless” she explains.

The album’s political tracks like the stripped back productions on ‘Fire Kites’ and ‘KIDS (feat. Blimes)’ strut around heavy bass drops, addressing the conflict in her region – on mothers bringing up kids on either side of the divide, and incendiary devices at the border. Mortality is a running theme in tracks like the sprung RnB of ‘End Of The Road’, after a personal loss changed their outlook – evident in the albums closing track, ending on a whispered late night lullaby that swells with emotional strings.

Throughout the record there are snippets of Erez’s mother speaking – including the endearing ten second opener ‘KTD’, part of the album’s reflections on the relationship between parent and child: ”We got to thinking about the relationship between one generation to the next,” says Erez. “These are songs about what we inherit from past generations, how we pass things on. How this game of evolution of our culture and humanity is very much in our hands. We were all somewhat a blank page at some point. KIDS talks about humanity’s potential for both beauty and destruction.”