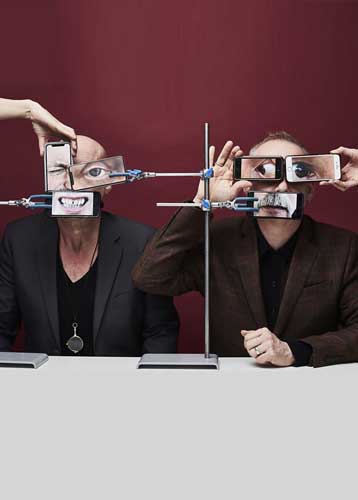 With nine studio albums and three decades of electronic dance music performances to their name, ORBITAL are known for their legendary live shows in front of huge festival crowds.

Paul and Phil Hartnoll recorded their 1989 single ‘Chime’ on their father’s tape recorder. It went on to become a rave anthem, and the brothers from Kent have been making waves on the techno scene ever since, whether performing together as ORBITAL or as individuals. The Guardian credited ORBITAL with ‘converting’ the 1994 Glastonbury Festival to dance music with a performance Qmagazine would call one of the top 50 gigs of all time. The band was also included in Q’s 2002 list of ‘50 Bands to See Before You Die.’

ORBITAL‘s diverse hits include remixes of Madonna and Kraftwerk and collaborations with soundtrack composer Angelo Badalamenti and Metallica guitarist Kirk Hammet. Known for live performances incorporating improvisation, they were joined on stage in Glastonbury in 2009 by actor Matt Smith for a remix of the Doctor Who theme.

Heineken Big Top audiences can expect to hear classic singles like ‘Chime’, ‘Style’, ‘The Box’, and  ‘Satan’ as well as songs from their latest studio album, Monsters Exist, released September 2018.

See for yourself why ORBITAL won NME Awards for ‘Best Dance Act’ and ‘Best Live Event.’ Don’t miss their only Irish gig of summer 2019!

Under 16s must be accompanied by an adult.

‘‘some of the greatest electronic albums of their time and an immaculate string of singles that effortlessly segue from early acid and rave through the headier ambient techno of their mid-90s.’ ’