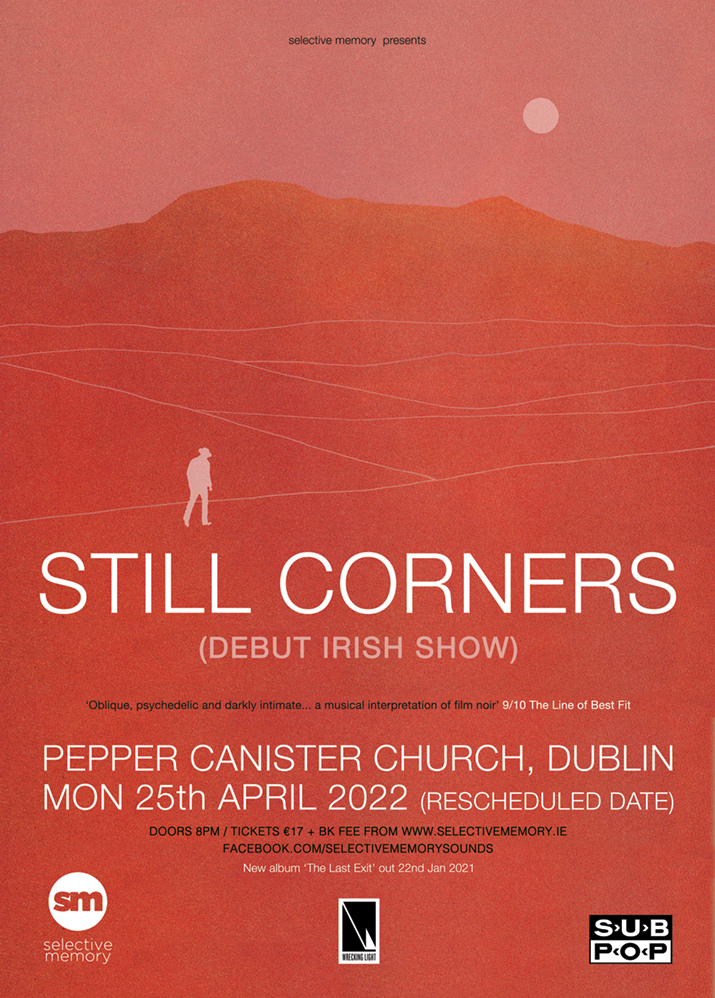 Most commonly compared to acts such as Beach House, Mazzy Star and Cigarettes After Sex; STILL CORNERS compromise Tessa Murrary and Greg Hughes, their previous four albums have been released on Sub Pop and Wrecking Light records. Their trademark cinematic big sound has seen them featured on TV shows such as Gossip Girl and Made in Chelsea, while helping them acquire an intense cult following worldwide.

What better venue in Dubin to host them than the spectacular beauty and acoustics of the Pepper Canister Church on Mount Street in Dublin 2.

“Oblique, pyschedelic and darkly intimate… a musical interpretation of film noir’ 9/10 The Line of Best Fit

Praise so far for new album ‘The Last Exit

‘Their fifth album has a desert-noir loneliness to it, underpinned by a hint of the shimmering electronics familiar from the first half of their career’ 8/10 Uncut

THE LAST EXIT is the fifth studio album from Still Corners, which will be released on 22nd January 2021 on Wrecking Light Records.

With the shimmering desert noir sound the band has become known for, THE LAST EXIT takes you on a hypnotic journey, one filled with dilapidated towns, mysterious shapes on the horizon, and long trips that blur the line between what’s there and not there. Greg says, “We found something out there in the desert – something in the vast landscapes that went on forever.”

THE LAST EXIT consists of eleven beautifully crafted songs with organic instrumentation, cl-toned guitar, spacious drums and the smoky croon of Tessa Murray. Album highlights include “The Last Exit”, “White Sands” and “Shifting Dunes” all of which evoke the vast space of the desert and rolling unconcerned skies.

The album was brought further into focus by the pandemic when almost everything was forced to stop. Tessa explains, “There’s always something at the end of the road and for us it was this album. Our plans were put on hold – an album set for release, tours, video shoots, travel. We’d been touring nonstop for years, but we were forced to pause everything. We thought the album was finished but with the crisis found new inspiration and started writing again.”

It was in this context that songs like ‘Crying’, ‘Static”, ‘Till We Meet Again’ were written, reflecting on the impact of isolation and the need for social contact and intimacy.

First single, ‘The Last Exit’ is the final chapter of the Still Corners’ Road Trilogy. What began with ‘The Trip’ and was followed by ‘The Message’ concludes with the stunning ‘The Last Exit’. The video, inspired by the 1975 film Picnic at Hanging Rock, finds Tessa pulled into the mysterious rocks of Joshua Tree. Tessa explains –

“In a world where everyone thinks all the corners of the map are filled in we like to suggest there’s something beyond that, something eternal in the landscape and in our psyche. Maybe you don’t see it every day but it’s there and that’s what we are trying to connect to.”

With a galloping beat, teardrop vocals and silver-tone guitar, The Last Exit races down a lonely highway to destination unknown. Elegant and searching with a grand piano ending, The Last Exit will remind you of another world beyond the one you see.