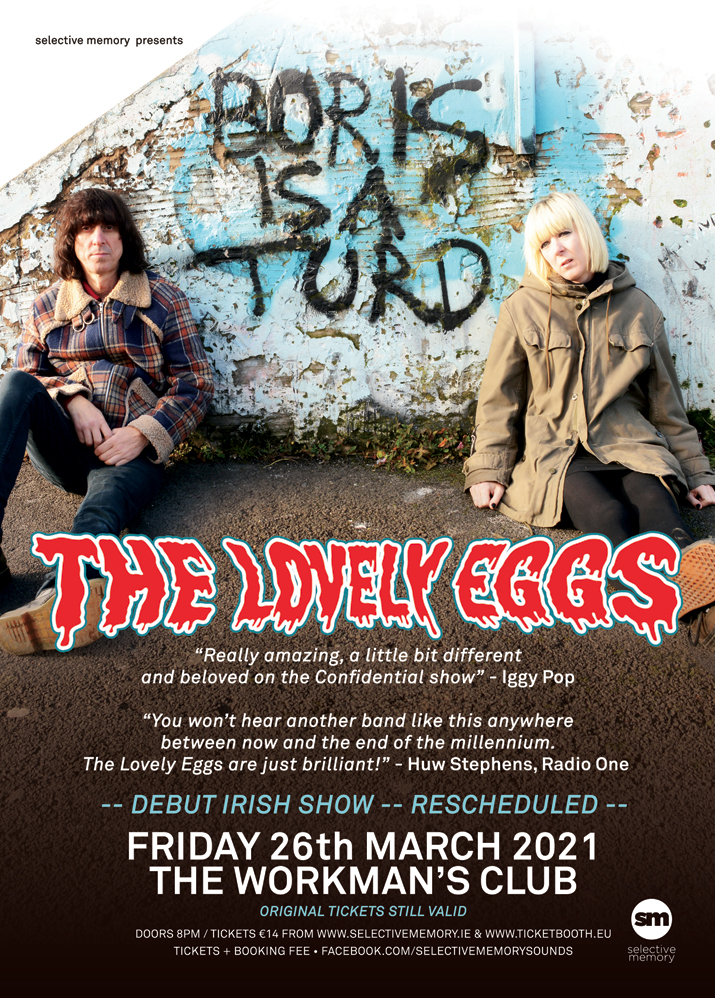 You do not want to miss this show!

The Lovely Eggs are an underground surreal-psych punk rock duo from northern England.

They have a fierce ethos that music should have no rules. They will be performing their new album ‘I am Moron’ in The Workman’s Club, Dublin on Friday 18th September.

Tickets for The Lovely Eggs’ debut Irish show in Dublin cost EU14.00 and are on sale from www.selectivememory.ie

For the last two years, The Lovely Eggs have sat back and watched England and the rest of the planet slowly eat itself. Their new album ‘I am Moron’ is the result of their observations, a relentless analysis of a modern culture that is bringing the world to its knees.

With observational and often surreal lyrics about life The Lovely Eggs have a powerful raw sound that creates the sonic illusion of a band twice their size. The result is a mix of heavy psych, pop and strangeness and they have become known for their ferocious yet joyous live performances.

The Lovely Eggs’ recently released single This Decision from the album is currently NUMBER ONE BABY in the following UK charts!

“You won’t hear another band like this anywhere between now and the end of the millennium. The Lovely Eggs are just brilliant!”- Huw Stephens, Radio One

‘I am Moron’ is the follow up to their critically acclaimed 2017 album ‘This is Eggland’. It is their second album co-produced and mixed by Dave Fridmann (The Flaming Lips, MGMT, Tame Impala) and continues their journey through Eggland into the unknown.

Operating out of their hometown of Lancaster, The Lovely Eggs are lonely pioneers and self-confessed kings of idiocy. Working in an industry whose currency is money, success and nepotism, The Lovely Eggs want none of it. They call out everything fake and plastic about the music industry and demand you to re-evaluate on their terms.

Continuing the heaviness of ‘This is Eggland’. ‘I am Moron’ brings more depth to their sound bringing with it a mix of heavy psych, pop and strangeness. Some songs flicker between an earthly realism and the otherworldly loneliness of a one-way space mission. While in contrast, ‘Insect Repellent’ launches a gonzo-style attack against the middle classes and Bearpit questions the essence of working-class freedom.

With no booking agent, manager, record label or publisher The Lovely Eggs are truly independent. And this isn’t due to economics. This is by design. From day one. And support for them is snowballing. They are selling out bigger and bigger venues and more eggheads are joining them in their crusade against bullshit.

Having produced five albums, their latest “This Is Eggland” was produced and mixed by Dave Fridmann (Flaming Lips, Mercury Rev, Mogwai, MGMT, Tame Impala) at his studio in upstate New York. It was released in February 2018 to critical acclaim and announced by HMV as one of their Top 50 Albums of 2018.

Their single “Wiggy Giggy” was added to the BBC 6 Music Playlist and the track received massive support from DJs across the board at BBC 6 Music with “This is Eggland” being declared Album of The Day. With 5 and 4 star reviews in the national press, the album went straight to Number 9 in the Independent album charts. Uncut Magazine described it as “Exhilarating and trashy”, The Guardian as “marvellous”, “yes that good!” from The Quietus and “unrelenting” from Pitchfork.

The Lovely Eggs are one of the most exciting, innovative and genuine bands on the British Underground Music Scene. Welcome to their world. This Is Eggland!