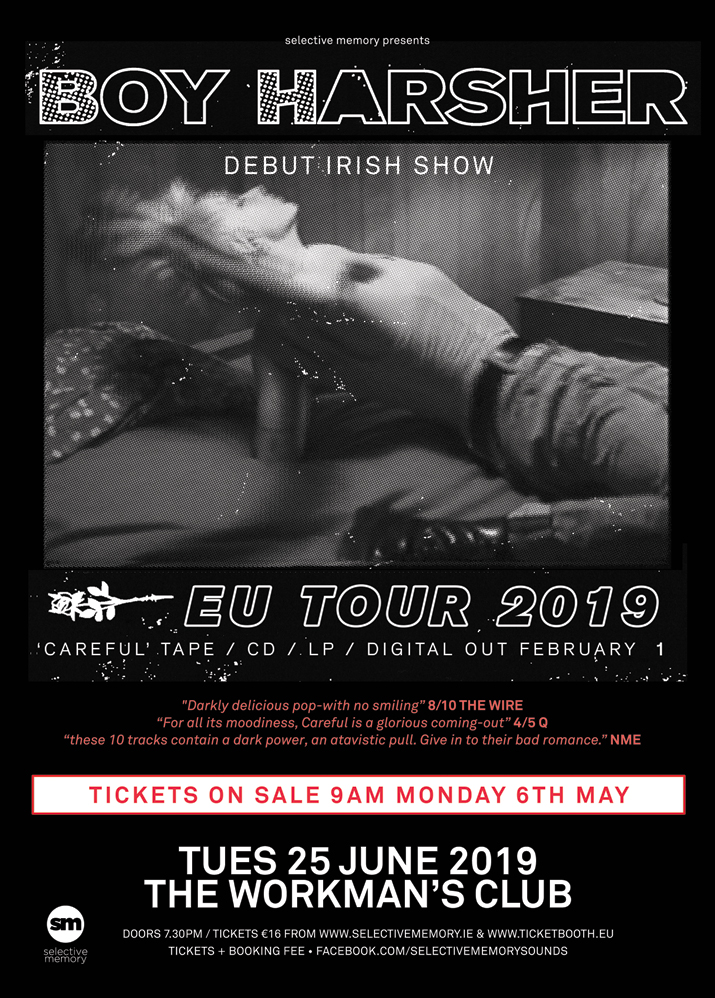 TICKETS GO ON SALE MONDAY 6 MAY
Dark electronic duo Boy Harsher have announced their first ever Irish show at Workman’s Club on 25 June 2019, following the release of their second LP “Careful” – a wild ride that celebrates abandon, while mourning attachment and love. Having embarked on two US and two EU tours this past year, where audiences recognised their set as a faster, harder version of their recorded material, their eagerly anticipated show is not to be missed.

Tickets €16.00 plus booking fee (additional charges may apply) go on sale Monday 6 May at 9am from Selective Memory (www.selectivememory.ie ) and Ticketbooth (https://www.ticketbooth.eu).

“Darkly delicious pop – with no smiling” 8/10 The Wire

“For all its moodiness, Careful is a glorious coming-out” 4/5 Q

“These 10 tracks contain a dark power, an atavistic pull. Give in to their bad romance” NME

Boy Harsher began as an urgent need to produce and consume. In the winter of 2014, Jae Matthews and Augustus Muller started to experiment with sound, video, and text. The advent of Boy Harsher! Born out of this tumultuous relationship in swampy Georgia, their first EP “Lesser Man” is sexy as it is sulking. “Lesser Man” determined their morose, pop sound. In their second album, the full length “Yr Body is Nothing”, Matthews and Muller took that dark and ran with it. Both releases reflect the fervor present in their adolescent lust and anger.

“Careful” marks Boy Harsher’s most dynamic album to date. The band expands upon the fine-tuned production developed in their last EP “Country Girl”, but with plenty of nods to the fast tempo and grittiness of “Lesser Man”. Matthews and Muller attribute the evolution of their sound to the extensive touring they completed in the last few years. “Traveling and connecting with people has been so fundamental;” Muller says “we’re really able to experiment with our material and it feels like the live set as grown into an entity of its own”. Careful was primarily written at home in Massachusetts, with just a handful of synthesizers and a laptop. For Muller a minimal set up is paramount to his process. Boy Harsher mixed the album in Italy with Maurizio Baggio of La Distilleria Studio who had a big hand in finalizing the sound.

Boy Harsher emphasizes emotive sounds and evocative narratives to generate palpable material in their latest release “Careful”. “Careful” is a timeless and original minimal synth record highlighted by a strong narrative and marks the definitive return of the enigmatic duo.