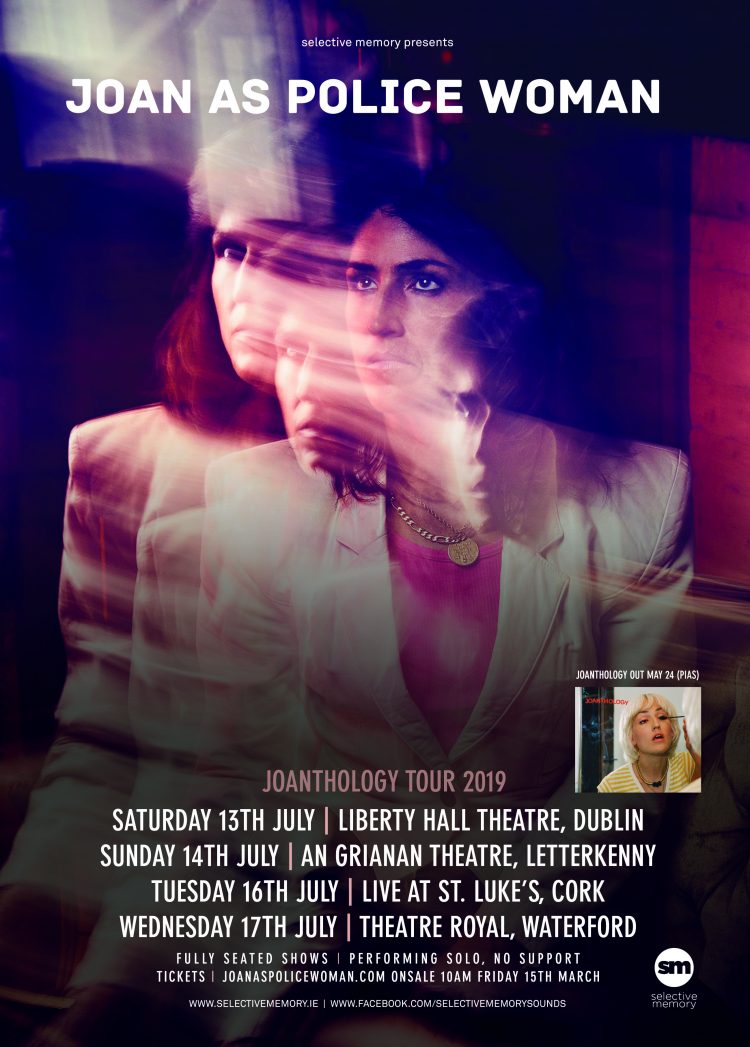 GET TICKETS FOR DUBLIN

GET TICKETS FOR LETTERKENNY

GET TICKETS FOR CORK

GET TICKETS FOR WATERFORD

Tickets are On Sale now

Following the release of Damned Devotion and sold out Irish tour last August 2018, Joan As Police Woman is set to return to Ireland with her captivating solo show “Joanthology” with shows in Dublin, Letterkenny, Cork and Waterford. All shows are fully seated and there will be no support

Already acknowledged as a thrilling live performer and starkly honest lyricist, new album Damned Devotion finds Joan Wasser at her rawest. While her 2014 album The Classic was a soulful celebration of life and her 2011 album The Deep Field a lush moody expansion, this new release sees her stripping her compositions back to the core, the bare-all lyricism and timeless melodies harking back to her accolade-winning album To Survive (2008) and the universally acclaimed debut album Real Life (2006). Joan: “My maxim is: if it feels scary to say it, it’s the thing you must say”. And on Damned Devotion the thoughtful lyricism is married to Joan’s most accessible music to date.

Famously a collaborator and muse to artists as diverse as Anohni, Rufus Wainwright, Lou Reed and Beck, since the release of her last album Joan has worked alongside fashion designers Viktor & Rolf as well as a growing list of musicians including Sufjan Stevens, Lau, RZA and most recently Daniel Johnston.

“I say yes to almost everything,” she admits. “I just want to be making music all the time. I can comfortably say that music has saved my life and continues to save my life. I am a devotee. It’s not something I can even choose or not choose, it’s just what is.” …Damned Devotion

Praise for Joan As Police Woman: