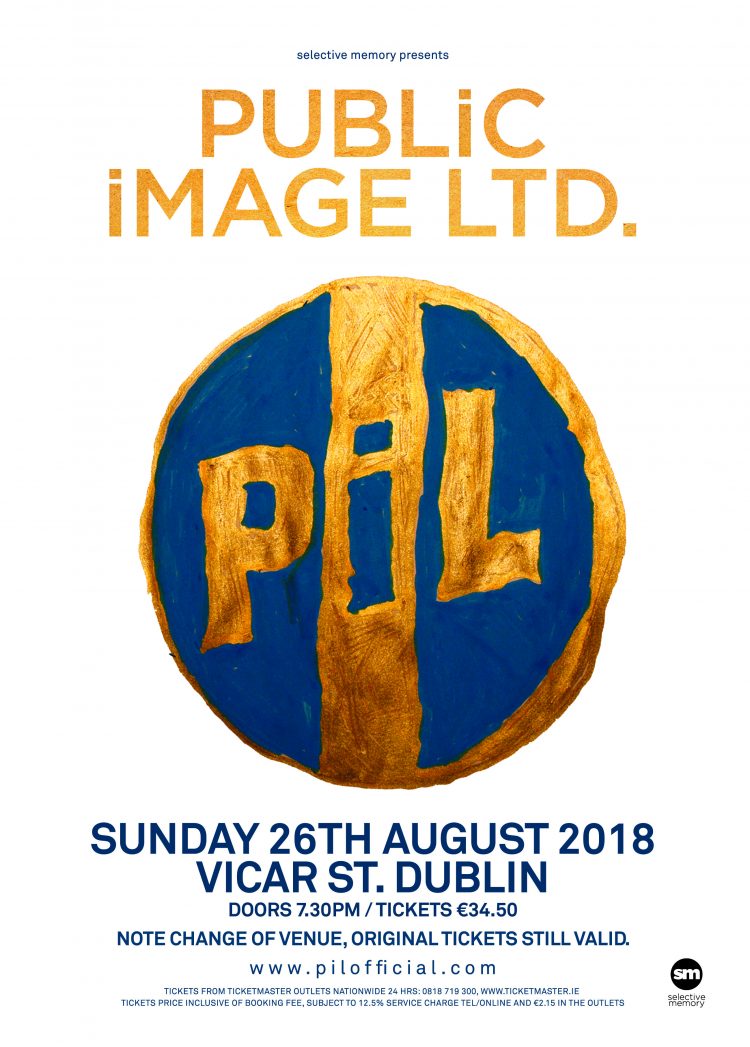 PUBLIC IMAGE LTD. MOVE TIVOLI SHOW TO VICAR STREET DUE TO PHENOMENAL DEMAND FOR TICKETS FOR THEIR FIRST IRISH SHOW IN 5 YEARS

PUBLIC IMAGE LTD. INVITES YOU TO CELEBRATE THEIR 40TH ANNIVERSARY

THE PUBLIC IMAGE IS ROTTEN

Due to phenomenal demand for tickets, Public Image Ltd. have moved their show from the Tivoli Theatre to Dublin’s Vicar Street. All tickets for the new venue are valid for the show which will take place on the same date on Sunday 26 August 2018.

Note that all Tivoli tickets purchased through www.ticketbooth.eu remain valid for Vicar Street.The band’s last Irish show was in 2013 and recent performances were regarded by many as the best performances the band have ever played.

To celebrate their 40th Anniversary, John Lydon’s Public Image Ltd (PiL) are pleased to announce The Public Image is Rotten:UK/Europe + Japan Tour, kicking off in Bristol on 30th May (see below for all dates).  Further PiL activity includes the release of a career–spanning box set and a documentary of the same name, the latter of which premiered at the Tribeca Film Festival in New York and then had its European premiere at London’s Raindance Festival in 2017. Directed by Tabbert Fiiller, it will be released later this year in select cinemas.

The forthcoming 32-date headline UK/Europe leg of the tour also takes in festival performances in United Kingdom, Holland andPoland, including a headline set at Camden Rocks Festival in London on Saturday 2nd June. The tour also includes an as yet to be announced very special London date. Japanese dates to be confirmed soon along with some further UK/European dates.

Widely regarded as one of the most innovative and influential bands of all time, PiL’s music and vision earned them 5 UK Top 20 singles and 5 UK Top 20 albums. With a shifting line-up and unique sound, John Lydon guided the band from their debut album ‘First Issue’ in 1978 through to 1992’s ‘That What Is Not’. After a 17 year hiatus, Lydon reactivated PiL in 2009 by taking them back on the road worldwide.

John Lydon, Lu Edmonds, Scott Firth and Bruce Smith continue as PiL. They are the longest stable line-up in the band’s history.

John Lydon – After fronting the Sex Pistols, John Lydon formed Public Image Ltd in 1978.  Outside of PiL John has released several solo records and collaborations. He also brings quality TV to the masses and has recently released the autobiography ‘Anger is an Energy: My Life Uncensored’.

Lu Edmonds – Multi instrumentalist and former guitarist in The Damned, Lu joined PiL in 1986 recording and playing on the album ‘Happy?’ and co-writing the  album ‘9’, adding yet another dimension to the PiL sound.

Bruce Smith – Drummer in The Pop Group and formerly of The Slits Bruce became percussionist for PiL in 1986 playing and recording on the albums ‘Happy?’ and ‘9’. Seen as a drumming virtuoso, Bruce brought his unique style into the fold.

Scott Firth – A bass player/multi instrumentalist that has collaborated and played with a variety of top musicians and bands including Steve Winwood, John Martyn and Elvis Costello.

Sun 26th Aug – Dublin, Republic of Ireland –  Moved from The Tivoli Theatre to Vicar Street due to phenomenal demand for tickets