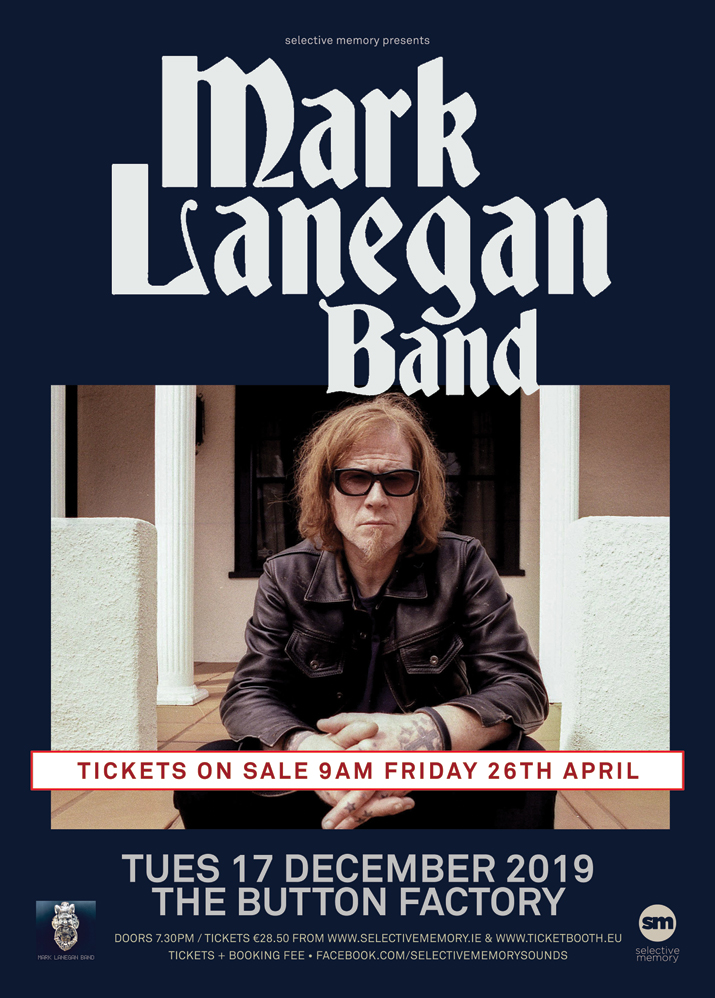 Ahead of his outstanding 11th solo album “Somebody’s Knocking” Mark Lanegan is set to return to Ireland with shows in Dublin and Belfast. The debut single “Stitch It Up” from the upcoming album is out now. Never idle, Lanegan is about to embark on a May US Tour that follows the release this past August of his album with Duke Garwood “With Animals” and, preceding that, the 2017 release of “Gargoyle”, both of which were put out through Heavenly Recordings.

“…an artist still sounding fresh three decades into his career.” The Guardian

“…the godfather of grunge…” Uncut

Singing with a deep, nicotine-ravaged growl that’s rich, strong, and sensuously forbidding, Mark Lanegan first rose to fame when his band the Screaming Trees won a taste of mainstream recognition in the ’90s. Though his first success was tied to the grunge scene, Lanegan subsequently carved out a strong identity of his own as a vocalist and songwriter.

His solo work has veered from the semi-acoustic atmospheres of 1990’s “The Winding Sheet” and 1998’s “Scraps at Midnight” to the adventurous hard rock of 2004’s “Bubblegum” and 2012’s “Blues Funeral” all the way through to the clean electronic surfaces of 2014’s “Phantom Radio”. Over his career Lanegan has been a frequent collaborator with a number of noted artists, including Greg Dulli, Queens of the Stone Age, Isobel Campbell, Soulsavers, and Duke Garwood.

While some of Lanegan’s collaborations got more press than his own work during this period, he hardly had his solo career on the back burner. 2001’s “Field Songs” offered the sort of dark, roots-oriented songs that were his trademark, and 2004’s more rock-oriented “Bubblegum” was the first album credited to the Mark Lanegan Band, though instead of a set band, the tracks featured a rotating variety of accompanists including Josh Homme and PJ Harvey. A second Mark Lanegan Band set, “Blues Funeral”, appeared in 2012, while Lanegan dropped two albums in 2013, a collaboration with multi-instrumentalist Duke Garwood titled “Black Pudding”, and a second album devoted to covers, “Imitations”. 2014 brought a third full-length from the Mark Lanegan Band, “Phantom Radio”, and in 2015, Lanegan partnered with a handful of producers and remix artists (including Moby, UNKLE, Soulsavers, and Mark Stewart) to create “A Thousand Miles of Midnight: Phantom Radio Remixes”.

By this time, Lanegan’s solo career had generated enough music to merit two different retrospective releases; in 2014, Light in the Attic issued the career-spanning compilation “Has God Seen My Shadow? An Anthology 1989-2011”, while in 2015 Sub Pop released “One Way Street”, a vinyl-only collection that featured new LP pressings of Lanegan’s first five solo albums. In 2017, Lanegan released “Gargoyle”, an album written with his frequent collaborators Alain Johannes and Rob Marshall; it also featured guest appearances from Josh Homme and Greg Dulli. Lanegan and Duke Garwood teamed up once again to record 2018’s “With Animals”, a set dominated by spare and evocative electronic accompaniment.

The eagerly anticipated “Somebody’s Knocking”, due for release in 2019, came together in an eleven day session in L.A., with many of the deepest musical influences on the record being European – be they the aforementioned electronic artists or newer, murkier forms provided by writing partners Martin Jenkins (who records as Pye Corner Audio for Ghost Box) or Rob Marshall – a collaborator on “Gargoyle” and on his own, forthcoming debut album as “Humanist”. Like Lanegan’s best work, the album is set to tell its own stories and weaves its own wonders, conjuring up feverish hallucinogenic visions to sit atop roughly hewn rock and glassy, brilliant bright electronics.