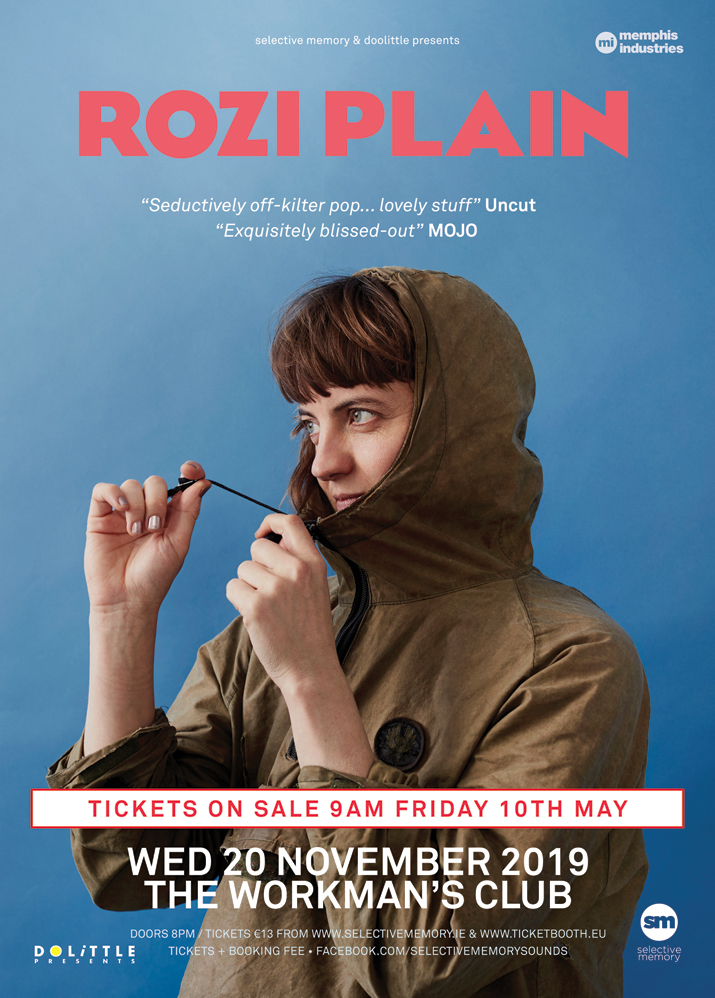 U.K. alt-folk musician Rozi Plain has announced her first Irish show in three years at The Workman’s club on 20 November 2019, following the release of her latest album ‘What A Boost’ on Memphis Industries and a raft of sold out dates on her UK tour. With an approach that’s intricate and quietly off-center, Rozi Plain emerged with her solo debut, ‘Inside Over Here’, in 2008. Over the course of the next decade, she expanded her intimate electro-acoustic sound while touring with artists including Devendra Banhart, James Yorkston, and This Is the Kit. Collaborators on her fourth LP, 2019’s ‘What a Boost’, included, among others, Sam Amidon, Chris Cohen, and sir Was.

Tickets €13.00 plus booking fee (additional charges may apply) go on sale Friday 12 May at 9am from Selective Memory (https://selectivememory.ie) and Ticketbooth (https://www.ticketbooth.eu).

PRAISE FOR ‘WHAT A BOOST’ INCLUDED

The music of Rozi Plain has always felt like a freeze-frame. A colourful and graceful snapshot of the world, paused, suspended in time, and then gently toyed with, like stepping out of the linear world as we know it. Wide awake in dreaming. There have been three records over the past decade, each one just like this, alluring and beguiling in the delicate nature through which they exist, as if one wrong move could lead the whole thing to collapse in on itself, sending you tumbling back to the real world at any given moment.

Her brand new album, ‘What A Boost’, carries the same sense of exquisite elegance but is an altogether different, and distinctive, journey. One, in fact, that was inspired and informed by just that: of travel and passage, of the unique inspiration found in different and differing people and places. Of movement and motion. Of journeying.

Tweaked and refined during a year spent touring the world playing bass in This Is The Kit, ‘What A Boost’ nurtures its homely roots and then blooms into a record that isn’t strictly about life on road but is undoubtedly, and beautifully, shaped by it. Textural, repetitive, propulsive, the whole piece plays out like a soundtrack to the world flying past the window; all of the shapes, colours, sights and sounds, flickering fast as we try to take as much of it in as we can.

Co-produced by regular drummer Jamie Whitby Coles, the record also features fellow live-band members Neil Smith, Amaury Ranger and Gerard Black. Elsewhere, Rozi opened up her new work to a host of friendly and familiar faces, with ‘What A Boost’ boasting informed playing from the likes of Sam Amidon, Rachel Horwood (Bas Jan, Trash Kit), Joel Wästberg a.k.a. Sir Was, Raphael Desmarets, Yoshino Shigihara (Zun Zun Egui, Yama Warashi) and Dan Leavers from The Comet Is Coming who recorded and played on experimental highlight The Gap. The album was subsequently mixed by Ash Workman (Metronomy, Christine and the Queens) at his Electric Beach studio.

Intricate and meandering, enigmatic and ambiguous, ‘What A Boost’ neatly sits alongside Rozi Plain’s past work, while opening up a whole new world to discover. One that sparkles and pricks at the senses. One that gently reveals more about itself with each passing play, rolling on and on through new vistas and pathways, through places to inhabit and leave behind; a succession of sequences that remind you to recall where you’ve been, where you are, and where you mean to go next. “Maybe this is a product of being away so much,” Rozi questions. “I feel like you do a lot of looking back, looking forward, looking at your life, and looking out of the window.”